Thinking About Generations and Faith

So lately there have been a lot of articles talking about Millenials and why they have left and are leaving the church.  This is actually a really hot topic right now.

There are some excellent pieces from Rachel Held Evans, one of my favorite authors and bloggers.  Her post appeared on CNN and prompted numerous responses.

I love the Millenials and hope that my next job will land me straight into working with them full time.  They are bright, thoughtful and, for many of them, they are inherently multi-faith.  I find them spiritually curious, hungry and desiring of depth.  I get really frustrated when our faith communities write off the college age crowd as not being interested in questions of religion and spirituality.  I also get frustrated when people of older generations say they don't know how to be in community because they are always on-line and that couldn't possibly be community.  In my own experience I have seen the power of social media to connect people - for joys and sorrows to be celebrated in real time, I have done pastoral counseling via chat, and I have seen how young adults care for one another in these places. That doesn't mean they don't, like any of us, need in person, face to face time in community, but please do not write off social media as lacking in the community or assume that social media is their only forum for community.

Yet what this really spurred for me is thinking about faith and my own generation.  I am in GenX or the Baby Bust generation depending on who you ask.  Now a word of caution here.  I find generational studies helpful and I get concerned that they are very white, middle class focused so I also approach these studies with a healthy amount of suspicion.  Also most studies when it comes to religion focus on Christianity so it is hard to assess how it looks differently if you are looking at Jews, Muslims, Hindus etc.  We are a more multi-faith America so I keep hoping articles and studies will show us more how these generational differences look across faith communities.

So some interesting initial observations.  When I posted a question to Facebook about what people were reading about GenX and religion - nothing, no one responded.  Now understand most of my friends on Facebook are Unitarian Universalists, many of them ministers and religious educators and then I also have a number of friends who are religious leaders within other faith communities. Nothing, no one could tell me what they were reading.  Then I googled it and I found one article from 2012 that affirmed some of my initial thoughts which is that members of GenX are leaving faith later in life, they more fit the mold of leaving as young adults, coming back when their children are young and then leaving again.  It also fits that they are more likely to have changed religious affiliation and are open and flexible when it comes to faith.  When I looked at the Pew Forum on Religion and Public Life Topic list Millenials are there but nothing about GenX. Now one UU colleague is thinking along the same lines and she posted this to her blog.  She is asking what do members of GenX want from faith community.

So I thought I would share here my own perspective on how being GenX has shaped my faith life and what I see among my friends.  Now I preface this with a bit about my own social location. I grew up upper-middle-class, in the suburbs, in California (8 1/2 years in Southern CA and the rest in the San Francisco Bay Area), I attended all Catholic schools from first grade through college, and I know that my experience cannot possibly expand to all members of GenX. So here we go.

As a GenX I grew up in a post-Vatican II Roman Catholic Church.  Now for those who are not nearly as geeky about religion as I am, Vatican II was a world-wide meeting of Bishops that sought to transform the church.  A number of important changes came out of the Council including the celebration of the Mass in the vernacular rather than Latin, changes to the rules around fasting and abstaining from meat, one key document affirmed democracy (I know a little late to the party but hey it is a 2000 year old institution) and outlining the role of the Church in the Modern World.  So everything from changes to liturgy, role of lay people and the role of the Roman Catholic church in the world was transformed.  So during my childhood I grew up with Mass in English, the priest faced the congregation (rather than having his back to it), I only abstained from meat on Fridays during Lent not all year, nuns stopped wearing the full habit, and many other changes small and large were being implemented while I was growing up.  This is really important because growing up, the Church felt like an exciting and vibrant place that was changing and growing.

I grew up going to Mass every week (you only missed if you were sick), we were expected to participate.  I also grew up with contemporary liturgical music. I grew up on the Songs of the St. Louis Jesuits - Be Not Afraid, On Eagles Wings.   Yet over time, as I moved in high school and certainly by College, Pope John Paul II and the conservative Magistarium sought to put the Vatican II genie back in the bottle.  We had statements closing even discussion on women's ordination, condemnation of the LGBTQ community, and a crackdown on use of contraception and abortion.  For me, during my College years I really came to question whether I could remain in this community - not just over these issues but over a whole system where one man along with a small group of men could make decisions for millions of people around the world without having to listen to their voices.

Growing up when I did, we are the first generation not expected to do better than our parents and that has certainly played our for me.  I am part of a generation that stopped expecting to go to work for one company and stay there our whole careers. I have had multiple careers and worked for multiple organizations.  Most of my friends have as well.  If faith communities are still operating on a model that people will come, settle down, raise their kids and stay there until or maybe even past retirement, it is defunct model that has been replaced with mobility, two income households and apprehension about whether we will ever be able to retire.

As a young adult I left the Roman Catholic Church, became an Episcopian.  I was active in the Episcopal Church but I was one of few young adults.  Even then decline was evident and the congregations were talking about their hey days from the 1960's and 1970's.  This was the 1990's when the Millenials are just being born so we can hardly blame the decline on them.  I became a Unitarian Universalist in 1999 when our daughter was born.  Even then we were among the youngest adults there.  In one seminary class I learned from a colleague's class project that I was the youngest person they found that has served on a search committee that wasn't a youth.  I was 33 when I served on that search committee.

So as I reflect on my own life and religious journey I see that the decline in participation in faith community was happening before the Millenials.  Life circumstances are changing the way people are relating to faith communities particularly with two income families, mobility and career change. This article points to some of these larger trends. So as we look at generations and faith it isn't just about how faith communities may be failing to keep up, lacking in authenticity, and out of touch but is also shaped by changes in our larger social life.

What impact does work life have on faith?  Well I have lived in multiple places since graduating from college, moved back and forth across the country three times.  I live thousands of miles from my family although we live within a couple hundred miles of my partner's family.  I have friends around the world and definitely throughout the United States.  All of this impacts faith because mine is not a story of settling into a place, having a job, finding a faith community and staying there.  Most of my friends have made multiple moves as well.

What about the faith lives of my friends?  Of my close circle of Georgetown friends, about seven folks, most of us met through campus ministry at Georgetown and attending a late evening weekday Mass together.  Two of them have left church and religion entirely.  One was confirmed at Georgetown and is still active as she can be given that she lives in a rural area.  Another two went back to the Church at the request of their children.  One is Unitarian Universalist like me and another has no religious affiliation.  All of them are liberal in their faith beliefs particularly when it comes to sexuality. 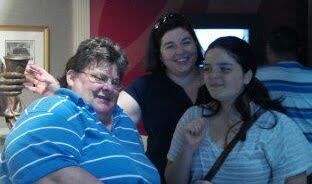 A picture of my family: a very end Boomer or the Jones Generation as they are sometimes called, a GenX and a Millenial

Right now members of my generation have children ranging from tweens to young adults.  How has our parenting shaped their faith?  We very intentionally raised our daughter within Unitarian Univeralism. Right now it is not looking good that she will continue down that path.  She indulges us as we explore a variety of faith communities.  Of course, her experience is that both her moms are religious leaders - she may not be the best example.  What is clear is that she is a person who regularly speaks in a theological voice and constantly engages in questions of ethics and justice even without attending one particular faith community. As this liberal, open-minded generation raises the next, what will their faith stances look like?  What will be important to them?

As for me, what do I look for from faith community?  I look for authenticity, openness in terms of sharing and openness to a breadth of spiritual and religious expression.  I want an embodied faith, not just a reasoned one.  I want to experience the Holy not just talk about the Holy. In the words of the Faith Formation 2020 I long for a faith that makes sense and an expressive, embodied spiritual experience.

What are you looking for?  How has your generational experience shaped your faith?  If you could create your own faith community what would look like, sound like, smell like?
Posted by Margaret Sequeira at 12:35 PM