I Will Not Stay Silent! 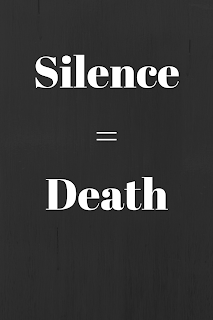 Now is not the time for silence, or saying it could never happen. Bad things happen when good people don't read the signs of the times.  The signs of our time are very dire and bleak. When a person running for President of the United States can systematically insult, demean and put in grave risk whole groups of people of these United States and the world, then we as good people cannot stay silent.

As many have seen, Donald Trump called for a complete ban on Muslims, even those who are US citizens from entering the United States, in addition to calls for monitoring mosques and ID cards for Muslims.  Certainly Muslims are not the only targets of Trump's anger and violence - people of color, women, people with physical disabilities and immigrants (documented and not) have been targets of Trump.  His message is resonating with a whole group of people, mostly white men who are angry. The anger of this group of white men is not without cause - after all many are working class who see every year that their jobs are vanishing and wages have failed to keep up with the cost of living for decades now.  Our political rhetoric, particularly from the right, blames immigrants, poor people, people of color for their problems rather than an economy that privileges the top 1% over everyone else. Donald Trump is tapping into their anger and frustration and giving them someone to blame when ultimately those like Mr. Trump who are a part of the 1% are cashing in on that anger in a myriad of ways.

Does this blame game sound familiar?  It should, because it is the foundational story of nearly every act of genocide.  Jews were to blame for Germany's problems, Tutsis in Rwanda, Bosnian Muslims in the former Yugoslavia.  In the United States, we rounded up those of Japanese descent under the guise of national security. Over and over again, after the truth comes out, we are horrified and we pledge "never again." We see the pattern that good people ignored the signs, they didn't think it could happen, not here, surely it is just rhetoric or that they spoke up too late or not at all.

We cannot just sit back and say "Oh No it will never happen here." We must speak up now and over and over again.  We cannot let Trump's words go unchallenged.

This list, which came from Rev. Amy Zucker Morgenstern, a Unitarian Universalist friend and colleague, of things we can do right now to be allies to the Muslim community.


I do not use Nazi analogies lightly, but the leading contender for one party's nomination has suggested we should shut down mosques and close immigration to Muslims. It is time to talk about fascism, religious persecution, and how we stop them.
What did Jews need German non-Jews to do when anti-Semitic demagoguery threatened them?

Please. Do it now.

I asked Samina Sundas what we UUs could do to support Muslims in our area and she said, please come to our Eid celebration and sponsor it if you can; I'll be asking the Board to do the latter, and urge you all to do the former. Dan established a relationship with the new mosque on San Antonio so that our middle schoolers could visit for their "Neighboring Faiths" program--we'll be asking them what they need from their non-Muslim neighbors.

Writing to the paper and declaring your support tells anti-Muslim cranks that it's they, not Muslims, who are isolated.

Make a video of yourself saying how you feel and put it on YouTube so that the world knows the people at Trump rallies don't speak for us.

Choose one thing and do it, so that we will not look back on this time and say "Why were the 'good Americans' silent?"


Each of us can do our part and most importantly we can pay attention and take seriously the threats that are being made against whole groups of people. Faith, authentic living, decent humanity demand that this time we don't just look back and say "never again"; if we mean it, then we will speak up and act now to stop this.

During this season of lights, of hope, of celebrating the return of the light after the darkest, longest night, of the oil that burned for eight nights instead of one, may we let our own light shine into these dark corners bringing light, hope and love!


Blessings during this holiday season!  May it be one filled with
hope, peace and love for each of us and the world!