Easter: A Sermon on Resurrection and Freedom 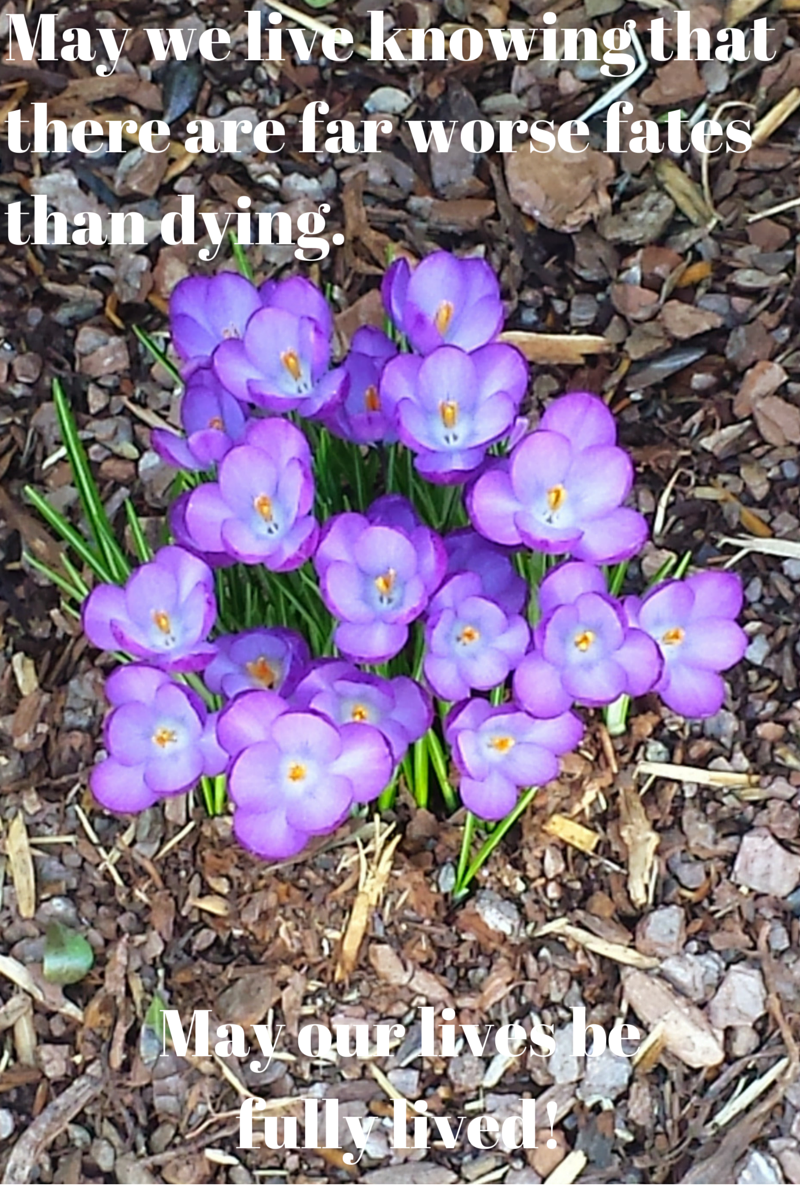 I preached this sermon on Sunday April 5, 2015 at the Unitarian Universalist Congregation of the Outer Banks.


Happy Easter, Happy Passover and Happy Spring!  Today we celebrate re-birth, resurrection!  The theme of life, death and rebirth is a recurring one in religion and in life.  We know this cycle.  We are born, we live and throughout the life we have periods of joy, loss and joy again and at the end of our life we die and then what happens, well, we don’t know for sure. We do know that our stories and our love continue to live in the hearts and minds of those who have known us.

I love this particular scene that I shared earlier from the Harry Potter books. J.K. Rowling throughout the series makes a powerful commentary on life and death.  There is no magic that can bring back the dead, that even the magic that claims to, the Resurrection stone, brings back only a shadow of the loved one,  and finally that there are far worse things than death.  In this particular scene, Harry’s willingness to accept death, all the while loving life, stands in stark contrast to Lord Voldemort who is so fearful of dying that he seeks to make himself immortal by splitting his soul through the death of others.  Here Harry hovers in between, given a choice between going on and returning to continue the fight.  His willingness to die has destroyed the horcrux within him.  Earlier in this scene Dumbledore explains how Voldemort dismissed love and the deep magic that is embedded within it and it was his undoing.  Harry chooses to come back, continues to risk his life to finally defeat one who has wrought so much suffering.  Harry does not shrink away from living and loving. He knows there will be losses and in fact more beloved friends lose their lives in the final battle with Voldemort.

I particularly love Dumbledore’s line that what makes you think it isn't real because it is in your mind.  So often when it comes to the Easter story, or the Passover story, or the Christmas story, or the birth of Buddha – we ask “is it real? Is it true?” and I think in doing so we miss the point.  The problem I have with those who read the Bible literally is that it misses the point.  The Bible stories were not told and re-told and then written down to provide a factual account of events – they were stories meant to speak to deeper truths about life, about people and about how we are to live. We all know that the Harry Potter books are not “true” but we know they contain “truth.”  Like the truth that it is our choices that define us, far more than our abilities, that death is not the worst thing that can happen to us.  The resurrection story tells us about how Jesus impacted those who knew him and those that followed.  For the speakers, hearers and writers of these stories – it was not about providing a factual account – it was about saying that they experienced something in the life and death of Jesus that profoundly changed their lives.  Jesus showed us a life lived out fully and in the remembrance of that fullness has shown that death is not the worst thing, perhaps even conquered death.

Jesus advocating for a kingdom not of wealth and power but one of servanthood, where the first shall be last and the last shall be first, he lived in service to the least of these and for that he was too big a threat to Rome. Jesus gave people hope, he loved them, he fed them, he healed them.  In the midst of despair, horrible oppression under Rome he loved them, he welcomed them, he welcomed everyone – even the despised ones. The hope he inspired was a threat to Roman power and empire.  Much like Moses inspiring the Israelites – demanding that Pharaoh let his people go, Jesus preached hope and freedom and love.  Powers of empire, money and oppression do not want those who are less than to have too much hope or consider too deeply that things could be different.  The message of Easter is that despite the killing of Jesus, they did not stop believing in his message of love and hope.  The story of Passover is one of liberation, freedom from the bondage of slavery.

We have been hearing in the news lately a great deal about freedom, particularly religious freedom. This freedom is not the freedom to live fully and deeply but rather the freedom from – the freedom from having to make difficult choices, to be challenged, to engage the diversity of life.  Ultimately, laws like those Indiana recently passed seek to provide shelter for certain segments of the community to NOT serve or engage with those who are different on the grounds that to do so would violate their deeply held religious beliefs.  Freedom from is only one kind of freedom and in fact, imprisons those who embrace it into a world that is small where love is scarce.

Yet this is not the freedom that Moses was preaching or Jesus was preaching.  Jesus and Moses preached a freedom to live fully engaged, a life engaged with all sorts of people, all sorts of life.  For the Israelites they were led out of slavery in Egypt to find their Promised Land – a land flowing with milk and honey.  Jesus preached a renewed land, a renewed kingdom where the hungry would be fed, the prisoners freed, the sick healed.  This is a freedom into life and into living.  These so-called religious freedom laws are saying that somehow religious people need to be insulated from the full diversity of humanity and human life. That somehow in encountering those who live or believe differently it is a direct threat to their own religious faith implying that even their faith is too small for the world.

Mary Oliver tells us today how often we miss the soul, the spark of the divine even when it is right in front of us.  Even when the sea is calmed, the multitude is fed, we often get too caught up in the day to day to notice. In the Passover Seder, the song Dayenu, It would have been enough, we are reminded that if only God had brought us out of slavery, or just given Shabbat, or just given the Torah – it would have been enough. The song reminds us that all of life is filled with blessing – the blessing of liberation, of rest, of truth – there is an abundance  - it is more than enough. The Passover reminds us of the abundance of life, the abundance of the sacred.  Easter too reminds us that Jesus’ life and ministry in and of itself was wondrous and enough – what is even more is that it lived on in the lives of those who loved him who shared what they had learned.  Our job is to pay attention; to not miss the moments of the holy, the sacred.  Our work is to have eyes to see the abundance of blessings and beauty around us and to help others to see as well.

So today in the midst of Easter and Passover, I invite us into freedom. May we like Harry realize that we have a choice.  The freedom and choice we have is to embrace all of life – with its wide diversity, with its pain, its joy, laughter and loss.  May we embrace the work to make the world more just, more loving, a more free place for all.  “When that which is different that comes over the threshold” – May we embrace it rather than turning away muttering.

May we live knowing that there are far worse fates than dying. May our lives be fully lived!