Coming Out and Being Out - A Pride Throwback Thursday Post

For this Throwback Thursday post I am sharing this 2013 post on the coming out of Jason Collins and my own coming out journey.  June is pride month.  A month of parades and witness to the diversity and beauty of the LGBTQ community.  It didn't start out as parades, it started with the Stonewall Riots.  Gay and lesbian people refusing to be harassed and arrested for being who we are and daring to come together.  Much has changed since Stonewall and yet much also remains the same.  In most states you can still be fired for your sexual orientation or gender identity.  Suicide among LGBTQ  youth is still an epidemic.  Caitlyn Jenner's coming out and sharing her transgender journey has filled the headlines and hatred is still alive and well. The Republican party continues to run on a platform opposed to marriage equality and in support of so-called religious freedom laws that enshrine discrimination against LGBT people. Yet there is also much to celebrate.  Caitlyn Jenner came out and had a national interview bringing attention to one person's experience of being transgender giving hope to others who have no such voice.  Marriage equality is the law of the land in the majority of states and with hope it will be ruled legal in all 50 states later this month.  Pride celebrations are found in all areas from small towns to large cities.  May the arc of justice continue to bend and may we continue to live into a dream where the words "liberty and justice for all" truly mean all.  Happy Pride! 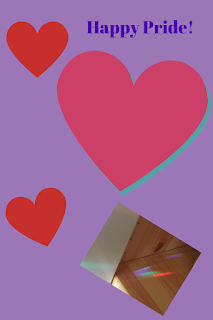 Coming Out and Being Out

Email ThisBlogThis!Share to TwitterShare to FacebookShare to Pinterest
Labels: LGBTQ, Throw Back Thursday