What Other People Think 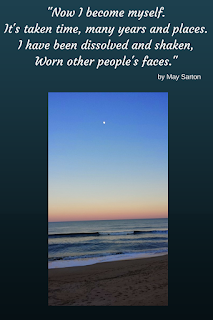 I have heard and know all the numerous quotes that remind me that most people are too worried about themselves and are not concerned about you.  Lately my concern about what other people think has been in relation to my work and my current life transition.  The what will people think or I fill in the blank about what they think it is a voice that says "you have not tried hard enough" "you are a failure" "you are lazy" and my top favorite "this is all your fault."  Unfortunately this spiral of what will people think, answering what they think with the most negative answers possible then continues down to a hopeless spiral of self-loathing and the belief that it will never be different.  This familiar to anyone else?  Given what I have read particularly from Brené Brown in The Gifts of Imperfection, I am not alone in this familiar pattern that all begins with the deadly question "what will people think."

As those who follow my blog know these past two years have been challenging (one might say I have been in the advanced course of resiliency training!).  I became acutely aware of the "what will other people think" while working at Food Lion.  Suddenly the comments about working at service jobs is for high school students and not meant to be a living wage, that if you are working a service job such as being a cashier it must mean you are lazy, uneducated, have not tried hard enough hit right in the chest.  In particular as a Unitarian Universalist minister I felt the "OMG what will the members of my congregation think - I saw them often as they frequently came through my line at the Food Lion" to "what will my colleagues think" and I could feel the I am so sorry you have to do this from my family and some others.  Unitarian Universalist ministers are not supposed to be working as cashiers at grocery stores or Walmart - maybe a book store but really we are supposed to be living the middle to upper middle class lifestyle and that does not include service industry jobs.  We have an image to uphold.  I am sure someone somewhere could come up with some way I broke some sort of unspoken unwritten boundary.

Not to mention how it felt if I said I graduated from Georgetown.  Alumni from Georgetown are heads of companies, non-profits and states (shout out to the King of Spain!) - they are not cashiers at Food Lion.  I could feel in my body that dreaded tightening in my stomach, that what must they be thinking -  a Georgetown grad (and not a recent one) working at Food Lion.

Now what I will tell you is that I enjoyed working at Food Lion and what I enjoyed about it is that I realized I need to be around people. I like talking to them.  I like hearing their stories as I rang up their groceries.  It was not so much the work itself - it was the people and realizing how much of a people person I really am.  So many of my colleagues and friends are strong Introverts and I definitely have that side of me and on the other hand I do get energy being with people.  I need both - time alone to rest and re-charge and time with people talking, sharing, hearing their stories. Ironically one thing I learned working at Food Lion is that I am becoming more extroverted as I get older rather than more introverted.  I think because I have been working hard at overcoming shame, getting over what other people think, figuring out who I truly am that I am allowing myself to enjoy being with people. I am letting myself more often be who I truly am instead of an image I believe I need to put forward.

What other people think is not a helpful question because 1) we can never truly know unless we ask them 2) why should we care what others think about us and 3) the answer most often comes from shame and that will not lead us to our authentic selves but to other people's version of us.  The question of what others think of us is about fitting in, not about belonging.  We need belonging and yet most of us have become masters at fitting in.  Brené Brown in her book The Gifts of Imperfection - which is fabulous and is a must read in my opinion - talks about the difference between fitting in and belonging.  "Fitting in is about assessing a situation and becoming who you need to be to be accepted. Belonging on the other hand, doesn't require us to change who we are; it requires us to be who we are." (Brown, p. 25)

I no longer just want to fit in, or fit into some image of who I think I should be or what others think I should be. I want to belong and I want to live wholeheartedly as Brené Brown describes.  So as I move forward into this next big change in my life I want to let go of any shame I feel about working at Food Lion because there is nothing to be ashamed of - I worked hard, I did a good job and they were sad to see me go.  I learned a number of things about myself - I learned I like working with people, I learned that I am really good at it and I am letting go of this notion that I would rather be alone than with others. I also learned that I can and will do what I have to support my family financially even if that is outside my comfort zone or doesn't fit into someone else's image of what a UU or a minister or a Georgetown grad is supposed to do.  I also really want to let go of asking the question what will other people think and twisting and turning myself into knots to make that happen.

This will not make everyone happy because people have come to expect me to be a certain way, to be a certain thing.  Yet I know what I want, I know the kind of life I want to be living and that may mean that some people's hopes for what I will choose will not be fulfilled.  It will also mean leaving some identities behind as they no longer feed me, they are no longer authentic to who I am today. That doesn't mean they were not important or authentic or true at one time, it just means now I am called somewhere different.  I can honor that past without remaining chained to it.  I am called to own my own story, my own self and to know deeply within myself that I am worthy of love and belonging. Brené Brown says it this way "If we want to fully experience love and belonging, we must believe that we are worthy of love and belonging." (Brown, p. 23).  In order to believe in my own worth means there is no place for worrying and conforming to what other people think.